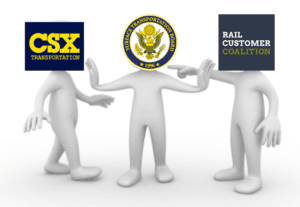 A couple days after letters from the Rail Customers and the STB were made public, CSX CEO Hunter Harrison responded in force. He didn’t mince words when he called the Customers’ accusations “unfounded and grossly exaggerated.” He then accused the coalition of using the issue to further their own goals of getting rate-setting and access rules (a.k.a. “forced access” or “competitive switching”) rewritten to benefit shippers over the railroads.

Some highlights from the letter include:

Though you [RCC] did not extend us the courtesy of discussing those concerns with us first, most likely because your statements were made to advance your longstanding attack on the balanced approaches of the Staggers Act, we wanted to respond to you directly…

…Since coalitions do not have service issues, we do not intend to continue a discussion with you about the service we provide to our customers. We are also aware that not all members of your coalition were informed of your letter in advance and some do not agree with your position…

…should your coalition wish to discuss the other completely unrelated topics like reciprocal switching which are more central to your agenda, we always welcome the opportunity to meet or talk with you at any time…

From TCU/IAM’s perspective, Hunter Harrison’s greed has made a mess of the railroad industry, and his actions are currently having far-reaching, unintended consequences. And while we may agree that the underlying goal of the Rail Customer’s letter is to prime the STB for re-regulating the railroads, Harrison’s actions have provoked this very-public squabbling in the first place.

Furthermore, we believe his inhospitable communications with customers is akin to poking a sleeping bear regulator. By highlighting the divide between customers and the railroads, he openly invites discussions on re-regulation that probably would not have otherwise occured.

A little background: Staggers Act rules were written to ensure the profitability and independence of the railroads. But Harrison’s repeated attempts to drive down operating ratios, increase shareholder returns, and his openly flaunting hostility towards customers could signal to regulators that the pendulum has swung too far in the railroads favor, and that it’s time for a roll back. In other words, Harrison is making the railroads look too powerful and too profitable at the expense of rail customers.

If re-regulation were to happen it could devastate the railroads (and rail employees). However, it’s not clear how much Harrison cares, since his goal of lining the pockets of the activist investors who put him in power at CSX – Ackman protégé and now CSX Vice Chairman, Paul Hilal – would already have been achieved.

It wouldn’t surprise anyone to see Hilal’s group exit their investment shortly after Harrison extracts every bit of short-term profitability from the railroad, but before he indeed provokes the government to re-regulate the industry.

Make no mistake: Harrison’s playing with fire, but it’s the rest of us – those hoping to see long-term success of the railroad industry – who are at risk of getting burned.