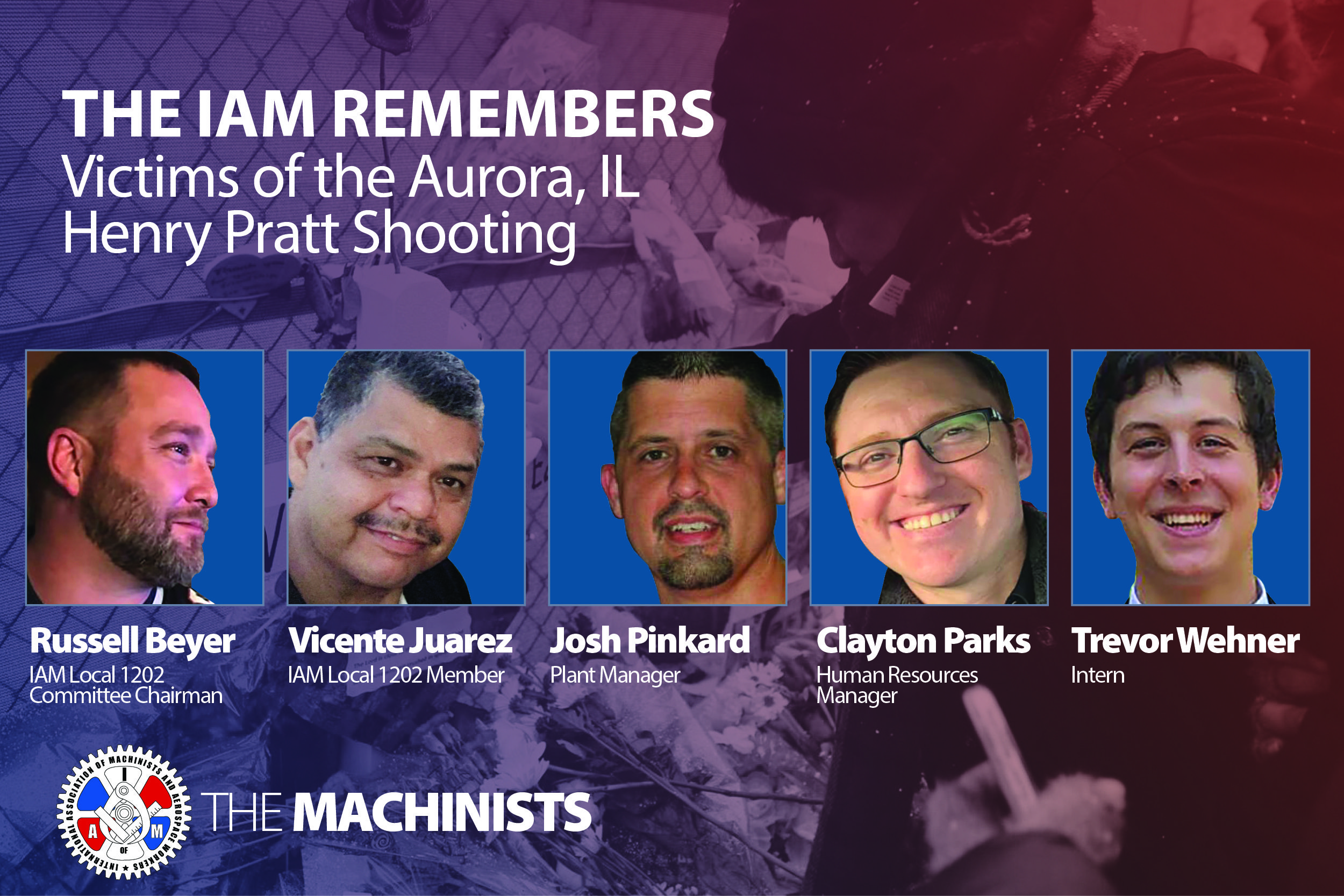 The IAM mourns the loss of two IAM Local 1202 members and three employees of the Henry Pratt Company in Aurora, IL.

The five victims were killed in a mass shooting that took place at the Henry Pratt facility on Friday, February 15, 2019.

“The IAM family is distraught about the terrible tragedy at the Henry Pratt Co. in Aurora, IL. Our members at Local 1202—and every working man and woman—should be able to go home to their loved ones at the end of each and every work day. Our heart breaks for the victims’ families and the entire community,” said IAM International President Bob Martinez. “The IAM is working to ensure our members get the assistance they need to move forward with their lives. I want to personally thank the Midwest Territory, District 8 and the Aurora community for wrapping their arms around our members and their families during this difficult time. We are also extremely grateful for the first responders who put their lives on the line that fateful day. I send thoughts, prayers and condolences on behalf of over 600,000 Machinists across North America.”

“The IAM is deeply saddened by the horrific tragedy that occurred Friday at the Henry Pratt Company in Aurora, Illinois,” said IAM Midwest Territory General Vice President Steve Galloway. “There are no words to express how thankful we are to first responders, IAM Local 1202, IAM District 8 Directing Business Representative Steve Jones and his entire staff, IAM Headquarters, the Mueller Company, and the entire Aurora community for their quick response in the wake of the tragedy. We continue to send our thoughts and prayers to the victims’ families and all those effected by this tragic event.”

“Even as my heart is broken because of these tragic events at Henry Pratt, I believe it is all of our responsibility and obligation to do the work to remember and honor those that have lost and sacrificed their life on February 15th – for all of the employees that had their lives affected, the authorities that responded to the incident, and the community that suffered such a catastrophic loss that day,” said IAM District 8 Directing Business Representative Steve Jones. “They should never be forgotten. I am also in awe of the love and support those affected have received from their communities. I give a sincere thanks to all that have given their time, thoughts and prayers to the families, our union, company and community.” 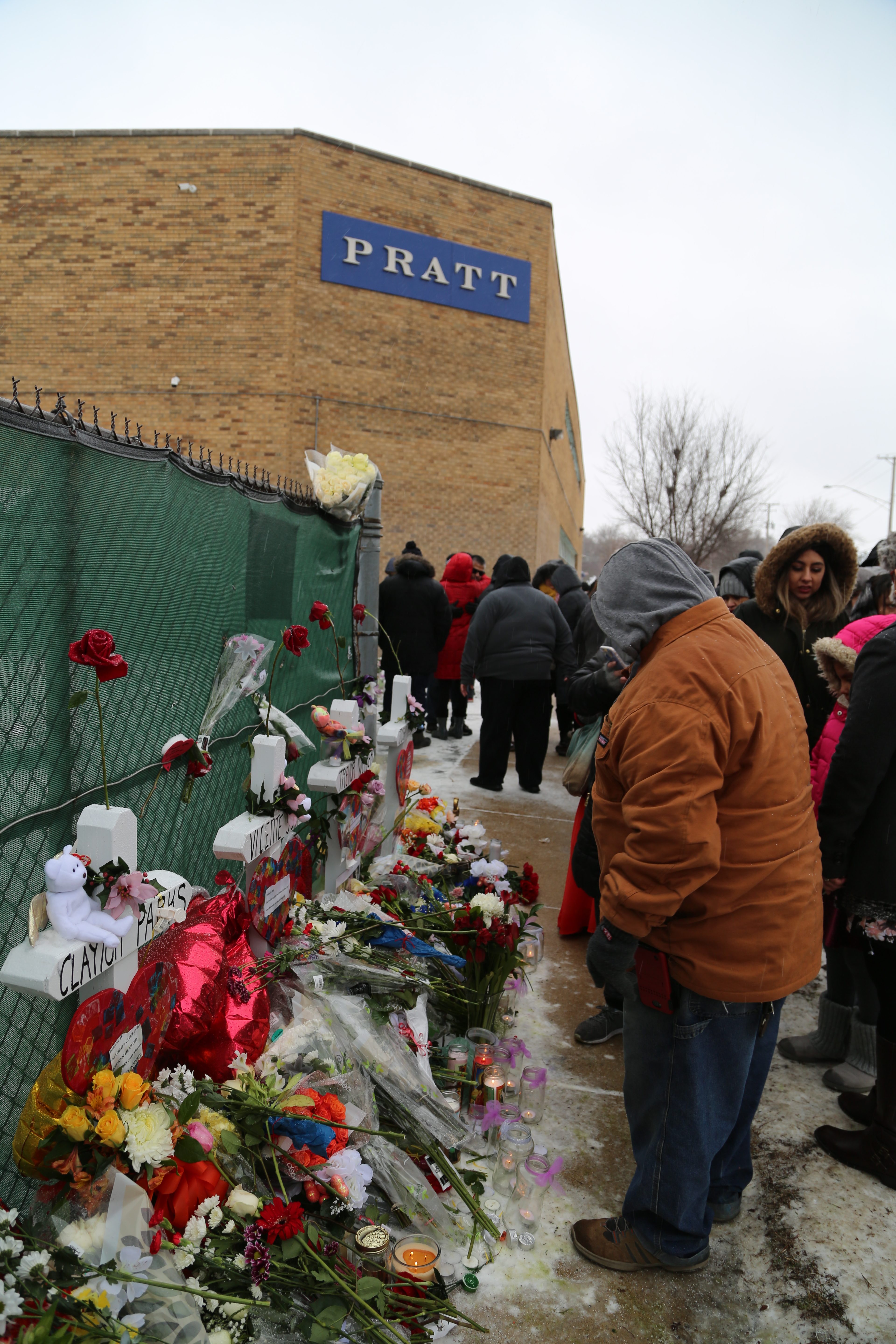 A vigil was held Sunday, February 17th in honor of the five
victims in Friday’s shooting.

Flags were lowered to half-staff today at IAM headquarters in Upper Marlboro, MD in honor and remembrance of the five victims.

The more than 60 IAM members who work at the facility make specialized valves for municipal water systems.

A vigil was held Sunday, February 17th in honor of the lives lost. See photos from the vigil here.

The victims are as follows:

Russell Beyer, 47, was a more than 28-year member of IAM Local 1202 and served as Shop Chairman. “Russell was a fun, loving gentle giant of a guy, who was friends with everyone,” says the Beyer family. “Russell would truly give you the shirt off of his back.  He was an extremely proud and dedicated union guy. A great Dad, Son, Brother, and Uncle. Russell will be forever missed by his family and so many more!” He is survived by two children, his parents, two siblings, one niece and nephew and his “loyal companion” Billy Bob, his dog. Visitation and funeral arrangements for Russell Beyer can be found here.

Vicente Juarez, 54, was a 13-year member of IAM Local 1202 and worked as a fork lift operator. “He was a hardworking, responsible and loving husband, father and grandfather,” says the Juarez family. “Vicente could always be heard shouting out loud ‘Ay Mija’ anytime the weather took a turn for the worst, all while comforting his family with laughs. Vicente had a passion for working on cars with his sons, and had a soft spot for a particular 1969 Chevy Impala.” He is survived by his loving wife of 38 years, Leticia (Lupercio) Juarez, three children, eight grandchildren, and eight siblings. Visitation and funeral arrangements for Vicente Juarez can be found here.

Josh Pinkard, 37, a native of Alabama, Pinkard became Plant Manager at Henry Pratt in the spring of 2018. “He loved God, his family and Mississippi State sports,” a cousin wrote in a text to the Chicago Tribune that he said was written on behalf of Pinkard’s wife, Terra Pinkard. He is survived by his wife and three children. Visitation and funeral arrangements for Josh Pinkard have not yet been finalized (at the time of this publication).

Clayton Parks, 32, joined Henry Pratt as Human Resource Manager in November 2018. He is survived by an infant son and wife, Abby Parks, who characterized him as “My husband, my love, my best friend.” Visitation and funeral arrangements for Clayton Parks have not yet been finalized (at the time of this publication).

Trevor Wehner, 21, a senior at Northern Illinois University, worked as a Human Resource Intern under Parks. Friday, February 15th was his first day. “He had a smile that would light up the room,” says the Wehner family, “and always had a silly joke or comment to say. He was fun-loving and made friends with everyone young and old.” He is survived by his parents and step-father, three brothers, one sister and grandparents. Visitation and funeral arrangements for Trevor Wehner can be found here. 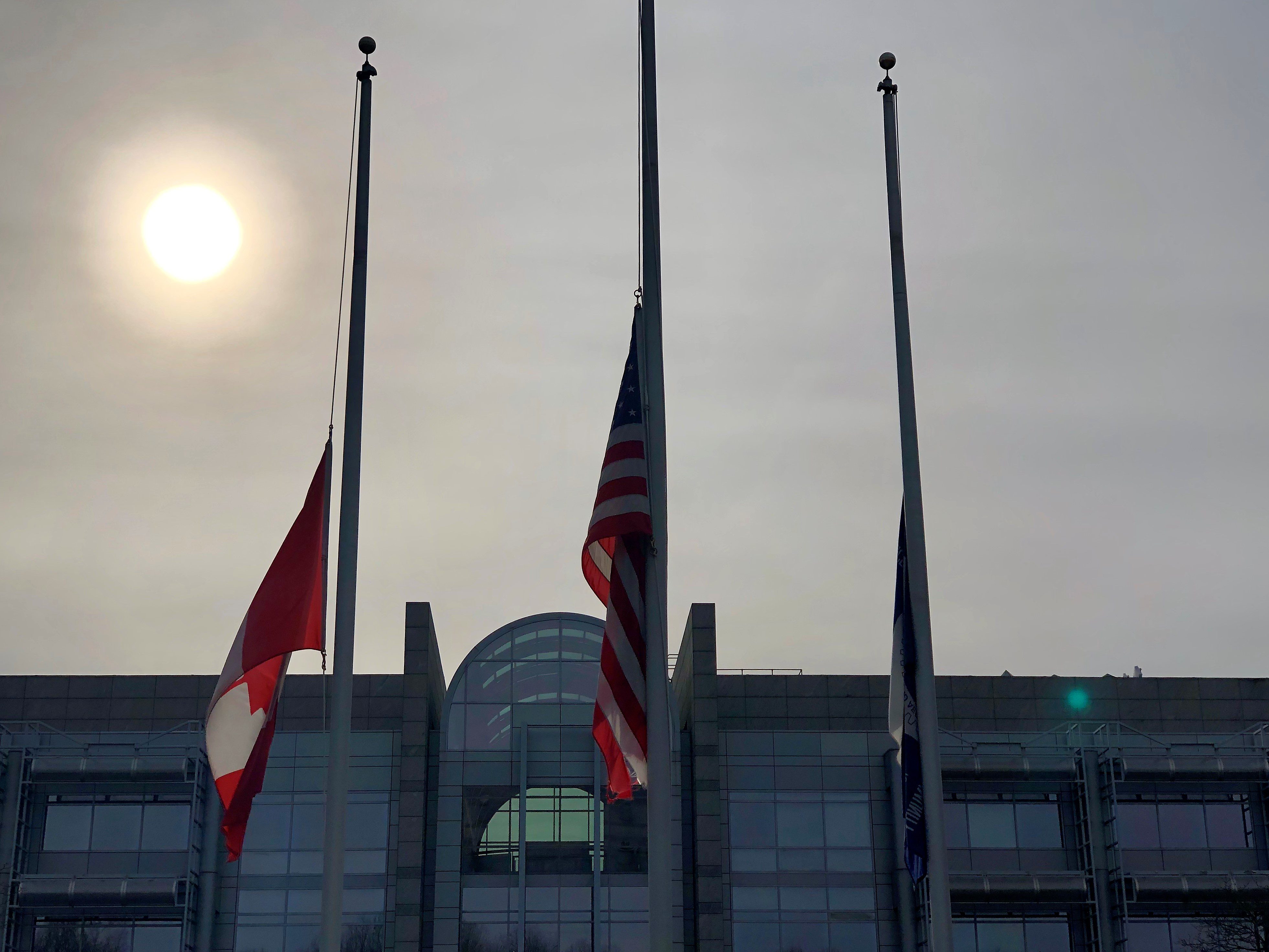 Flags at IAM headquarters in Upper Marlboro, MD are being
flown at half-staff in honor and remembrance of the five
victims in Friday’s shooting.

IAM Local 1202 members returned to the plant for an opportunity to come together and support each other Monday. The Pratt facility will remain closed for production this week, but the company will keep doors open to employees who wish to come by to spend time with colleagues and/or receive grief counseling made available through the IAM Transportation Department’s Critical Incident Response Teams (CIRT) and IAM Employee Assistance Program (EAP). Seven members of both programs were immediately deployed and on the ground the day after the shooting to provide grief counseling to union members, company employees, their families and all those in need of extra support in dealing with the tragedy. They are on-site at the plant and will continue to provide counseling throughout the week.