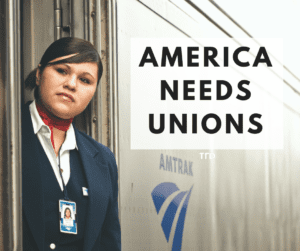 Eleven U.S. Senators wrote Amtrak this week in two separate letters that criticized Amtrak’s proposed cuts to long-distance train service and plans to eliminate 20% of the workforce – many of which would be TCU members. As the largest union on Amtrak – representing approx. 6,800 Amtrak employees nationwide – our union is fighting diligently to prevent these shortsighted cuts.

“…Amtrak’s plan to terminate one out of every five employees would put thousands of Americans out of work at a time when millions of Americans have lost their jobs. This severe reduction in workforce raises serious doubts about whether a realistic plan exists for fully restoring service in a timely fashion…” [Excerpt from letter led by Sen. Daines and six other U.S. Senators]

TCU members are grateful to Senator Steve Daines (R, Montana) for his continued leadership on defending Amtrak long-distance service and our members’ jobs (Senator Daines has been a helpful voice in our previous efforts to restaff rural stations). His letter was joined by Republican Senators Cramer (ND), Hoeven (ND), and Braun (IN), as well as Democratic Senators Bennet (CO), Heinrich (NM), and Udall (NM).

[Attention Amtrak Workers! Click HERE to write your members of Congress and tell them to fund Amtrak and save our jobs!]

“…Rural networks could see trains running three days a week instead of seven, and 20 percent of Amtrak employees could lose their jobs…Putting the brunt of budget shortfalls on rural America and its workers is unacceptable, no matter the circumstances, but it’s particularly egregious when Amtrak’s long-distance provided double the revenue of state-supported routes or the Northeast Corridor combined in May. If Congress is going to continue funding Amtrak at historic levels, you need to work to ensure this path forward works for places such as Montana, Nevada, and West Virginia alike…”

The importance of Amtrak service and jobs in these uncertain times should be front-and-center for our elected officials. As numerous articles have noted, the ability to socially distance on a train is far greater than in an airplane – and we project that ridership demand on long-distance services will be greater than other modes in the coming months.

“We’re grateful to this bipartisan group of Senators for standing up for long-distance service and Amtrak jobs,” said TCU National Vice President & Legislative Director Bill DeCarlo. “We just hope some sort of funding fix and job retention requirement can get passed before the October 1st deadline when Amtrak starts laying off our members.”