Earlier this summer, Congressman Mark Takano (CA-41) and Congressman Brendan Boyle (PA-13) visited with Amtrak reservations agents at call centers in their respective districts. Their visits came at a crucial time as Amtrak is currently in the process of setting up an outsourcer and could shutter one of the two facilities. 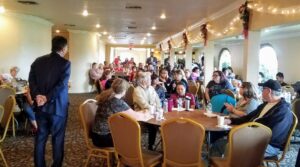 Combined, the call centers in Riverside, CA (LL 2511) and Philadelphia, PA (LL 878) employ almost 900 full and part-time reservations agents. All are represented by TCU/IAM. These are good-paying jobs with negotiated healthcare and benefits; but, under Richard Anderson’s leadership, Amtrak has taken the stance that contracting out work is better for their bottom line. This despite Congress appropriating record sums to Amtrak in their FY2018 budget. And, according to preliminary bills passed by Appropriations committees, Amtrak can expect an increase to their subsidy even further.

“It’s sad that Amtrak insists on taking such a stance with TCU members, despite our union’s long history of fighting for, and working with, Amtrak to support the railroad in both good times and bad,” said TCU/IAM President Bob Scardelletti. “Amtrak’s ridership and funding are both at peak levels – and that’s in no small part due to the efforts of this union and our hard-working members at Amtrak.”

During his visit, Congressman Boyle told the reservations agents in attendance that he wants to fight to keep these jobs here. Amtrak should listen to Congressman Boyle, and his other colleagues in the House and Senate, when they urge Richard Anderson not to outsource these good jobs to the lowest bidder, and keep them in-house, in-union where they belong. 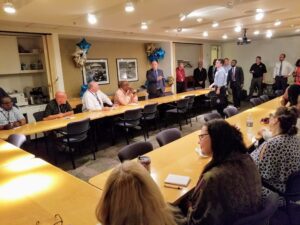