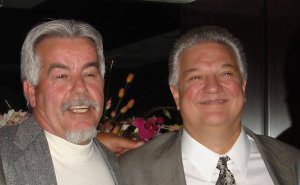 After 33 years, Local 1315 Chairman Ray Huffer retired December 31.  Signing on in 1971, he had served as Local Chairman since 1996.  The local represents some 750 members at the Los Angeles Metropolitan Transit Authority.
In his years of leadership and activism, Huffer served as chief negotiator in several contracts, winning key improvements in members’ wages and benefits at LAMTA.  He was known by union and management alike as an expert in the complicated intricacies of pension and health and welfare trust fund negotiation, and his knowledge served members well to upgrade and enhance their pension benefits and health care coverage.
These advances did not come easily.  At the last convention, Huffer recounted how, since he had joined the union, the local had been involved in eight strikes, the last three not by TCU members themselves but by other unions whose lines members honored for prolonged periods of time.  He thanked the officers for establishing TCU’s Hardship Fund, “creating the concept that if you honor a picket line, your union will pay you as if you were on strike.”  Local members received several hundred thousand dollars of relief during each of the three strikes.
A new roster of leaders picks up the reins, starting with Olivia Nelson-Richard who serves her first term as Local Chairwoman after serving as President for 12 years. Others include President Juanita Cook, Vice President Michael Winston, Financial Secretary-Treasurer Freddie Flores, Recording Secretary Toni Roberts, Chairman of the Board of Trustees Manuel Chavez and Members Paul Arndt and Ramona Escareno.
The next round of negotiations has just begun. International Vice President Joel Parker is assisting LC Nelson-Richard and the local officers who constitute her bargaining team. “We are hopeful that with the new political reality in L.A., with Antonio Villaraigosa as mayor, these negotiations will be smoother than the last three rounds,” says Parker.