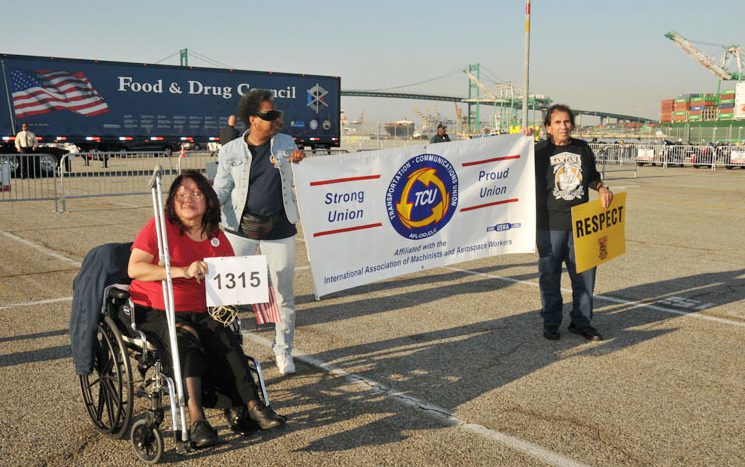 April 25, 2008—From April 15-17 actors, janitors, longshore workers, many other workers and their supporters in the community marched 28 miles from Hollywood, California, to the docks of Los Angeles in San Pedro.   The march concluded with a massive rally late in the day on the17th at the Port of Los Angeles.  Joining them were several members of TCU Local 1315, reports President Maggie Cook. (Seen in the picture with TCU’s banner are, from left, Cook; Leslie Smith, co-chair of the local political action committee; and Roland Arredondo, steward.) The action was about the fight for middle class jobs, the battle to organize workers and the importance of voting in order to win the “2008 Fight for Good Jobs.”  Here’s a report of the situation from the Los Angeles County Federation of Labor:

“The Fight For Good Jobs hits at the heart of what is wrong with Los Angeles – a diminishing middle class, a place where 3.7 million live in poverty, home to the low wage Capital of the country and a place where the dream of owning a home is often unattainable. Today, one third of the county’s 3 million full-time workers earn less than $25,000 a year, an income not even near the $133,506 needed to purchase a median ($549,000) priced home.

“In 2008 we have the opportunity to do something about this as L.A.’s workers face unprecedented challenges and opportunities – a year in which more than 350,000 workers, belonging to 30 local unions, will re-negotiate their union contracts; this is the largest number of workers in the history of the L.A. Labor Movement. These workers hail from key sectors reflecting the core of L.A.’s economy: actors, longshoremen, homecare workers, teachers and janitors.

“At the same time over 30,000 port drivers, security officers, car wash workers, hotel workers, construction workers and LAX passenger service workers will continue their fight to move out of poverty by joining a union.

“While 2008 will be a year filled with electoral races including the Presidency of the United States, L.A.’s workers will play the greatest role and make the largest impact in the race to elect a new Los Angeles County Board of Supervisor. Who we elect to the County Board of Supervisors is crucial to working men and women because politicians make decisions on our pensions, on whether construction workers doing work on public funded projects are making good or poverty wages. They make decisions about healthcare and all the other cares that working men and women have. They can either stand in our way or help ensure that we create good jobs, not just more poverty jobs.

“So when it comes to contract fights, organizing and politics in 2008, we are combining them all in The Fight for Good Jobs. Because whether it’s workers fighting to ensure that their jobs remain good middle class jobs, or it’s about fighting to move out of poverty by joining a union or voters ensuring that elected leaders fight for workers and children – all of these struggles overlap for one common goal – the need for good, not poverty jobs. So in 2008, workers will work together like never before. We will combine all of our resources and tap every ally to ensure that we win The Fight for Good Jobs.”