District 1908 — News about events and members at Disney World

June 6, 2007 —Members of the Service Trades Council at Disney World in Orlando, Florida, finalized a three-year contract Wednesday, June 6, 2007.  The contract includes pay hikes of 4-5 percent annually and improves pensions.  It runs through October 2, 2010.  The Council includes TCU members of District 1908, as well as members of UNITE HERE, the UFCW, Teamsters and IATSE.

March 2, 2007—In a victory in the ongoing struggle to stop Disney World in Orlando, Florida, from contracting out members’ jobs, a recent settlement of an unfair labor practices complaint will cost the company nearly $120,000.  The settlement agreement was approved February 2 by the National Labor Relations Board, closing the case filed by the Service Trades Council which unites six unions at Disney, including members of TCU District 1908.  At issue was Disney’s late 2005 hiring of outside contractors for overnight-shift custodial work, eliminating the jobs of 170 Disney World employees.

“A settlement in this amount of money is a good sign,” Council President Morty Miller told the local press. The money will be divided among the affected workers according to their wage rates at the time.  To publicize this success, the labor council rallied members outside Disney World gates on Friday, March 2.

As Disney World has sought to eliminate good, fulltime jobs by contracting the work to outside non-union employers, union representatives are concerned not only that the quality of the jobs done has suffered but the rights of workers are easily abused.

Consider a March 6 news report about an unconscionable contractor: “More than a dozen people hired to clean Downtown Disney said they were fired just because one of them complained and now they’re fighting to get the money for the work they did,” the story starts. The workers were illegal immigrants hired by an outside contractor to clean floors, scrub bathrooms and the like at Disney World. Not only were they all fired when one person complained about the long hours and bad treatment but 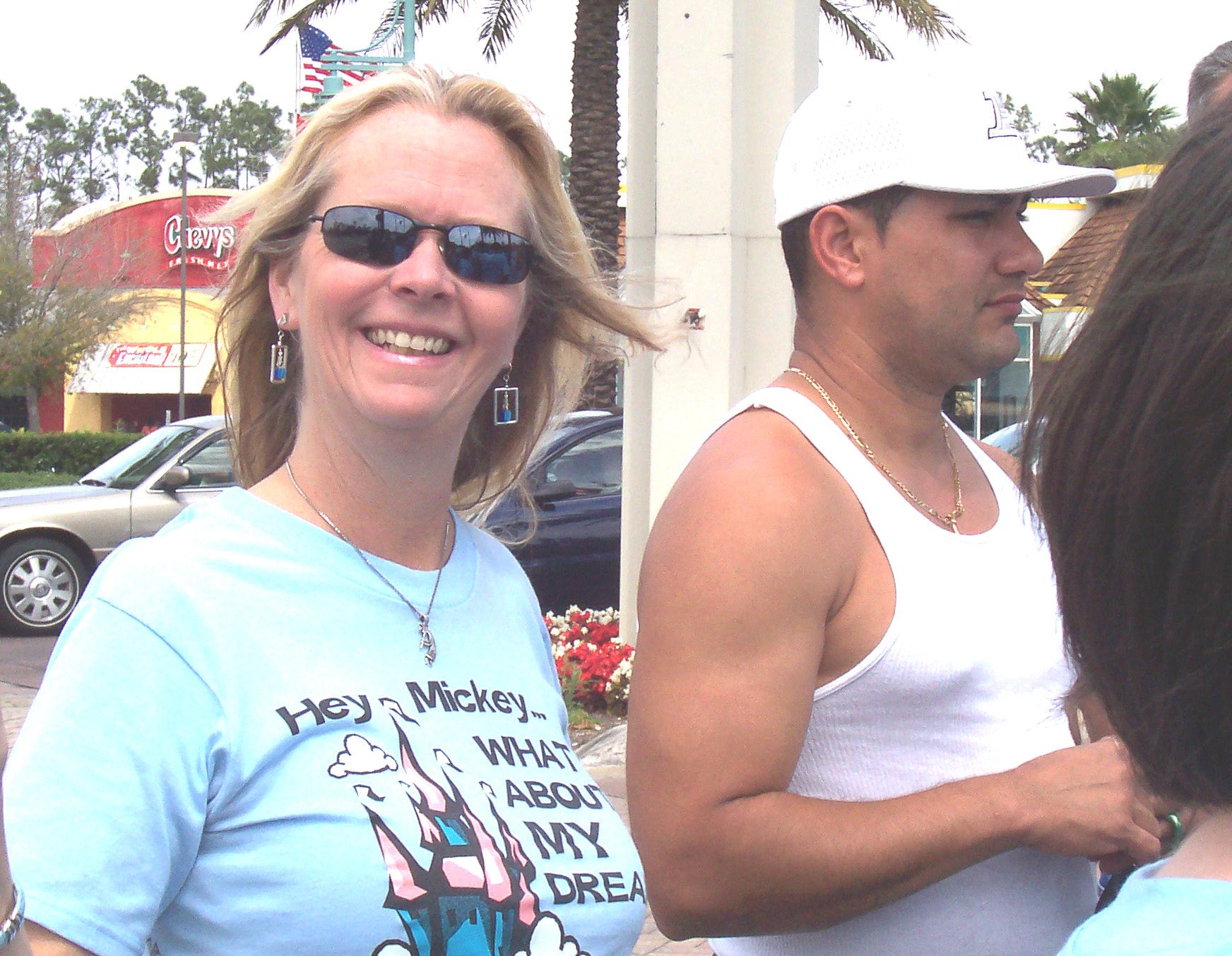 they were told they would not be paid for their work because they didn’t have the proper documents. 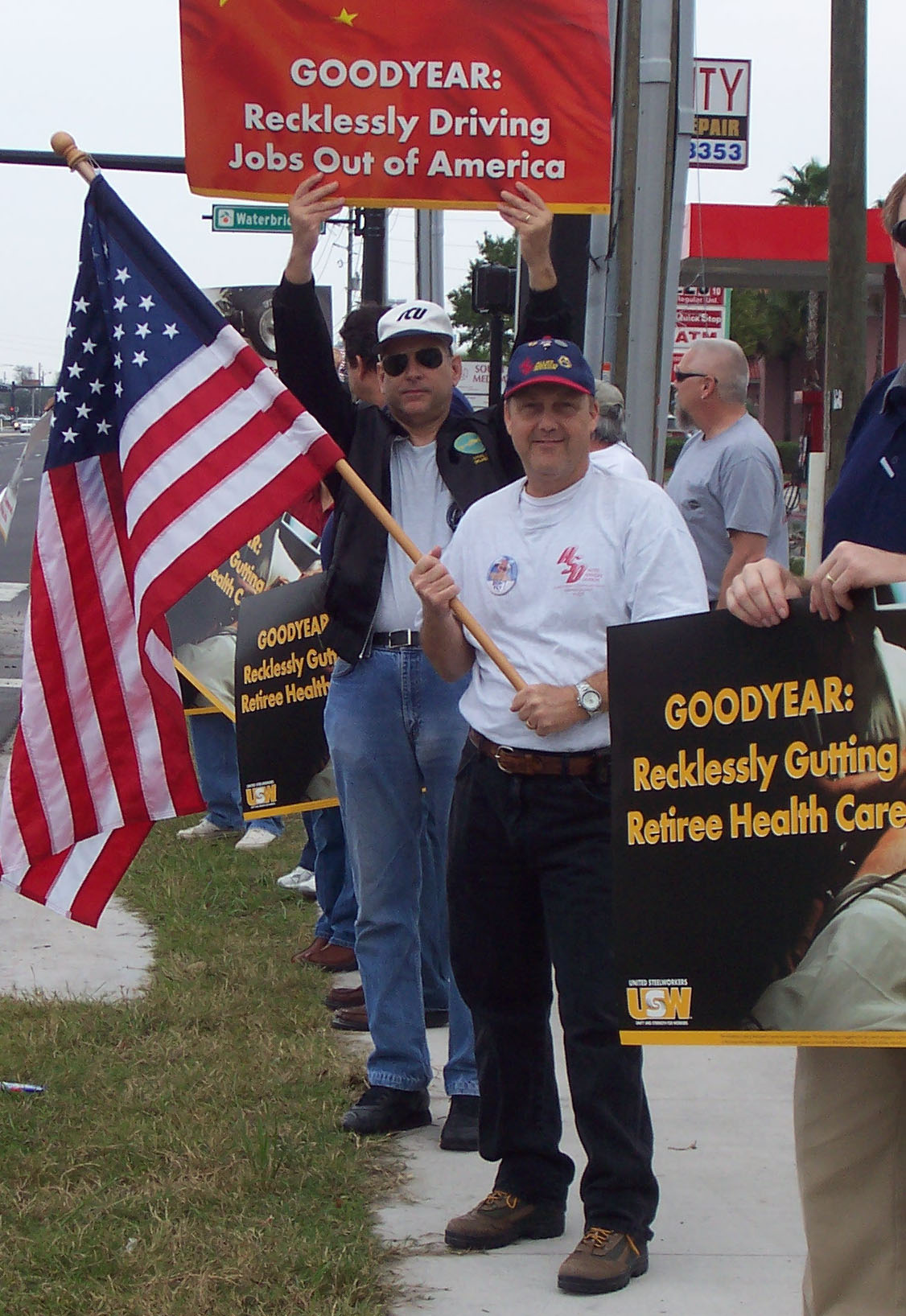 December 16, 2006 —75,000 union members across this nation leafletted some 150 Goodyear tire stores this day and there in the front lines were members of District 1908 in Orlando, Florida.  They were standing in support of United Steelworkers members forced out on strike by plans of Goodyear Tire and Rubber Company to outsource jobs to China and gut health care provisions, among other things.  Seen in the photo is District 1908’s Walt Angell, holding the U.S. flag, with UNITE-HERE (and former TCU) member Frank Kubicki holding a sign aloft.  These Disney workers are themselves caught in a struggle with their own employer on the issue of outsourcing.

With Jobs on the Line, Members Protest Outsourcing

December 8, 2006—All is not well in the world of Disney in Orlando, Florida.  Management has begun outsourcing jobs, hiring outside companies to do the jobs done until now by Disney World employees.  Nearly 600 jobs have been affected in the last year.  Now plans are afoot to hire outside contractors to take over custodial, valet, bellhop, baggage handler and other jobs, starting early next year.  Many of these are jobs currently held by TCU members of Allied Services Division District 1908.

To raise public awareness of the situation, the Service Trades Council, in which TCU actively participates, rallied at noontime outside the gates on Friday, December 8.   The Council unites six unions at Disney World, representing some 29,000 Disney workers; other unions represent an additional 11,000.

Key questions about outsourcing at Disney World were posed to a reporter for the Orlando Sentinel by Council President Morty Miller:  “Are the employees of an outsource company required to live up to the sa

me standards as Disney employees?  Are they subjected to background checks, costuming and grooming policies, other standards that Disney requires of its employees?”

Morale is low, says District 1908 Chairman Gary Lamboy: “There is a lot of uncertainty among the workers and this being the holidays makes it rougher for everyone,” he says.   “We work hard and we are proud of the jobs we do to create the atmosphere loved by families for so many years.  But we want to be clear with management that we stand together, and that was what this rally was about.”  Also active in the council are TCU International Vice President Joe Condo and District 1908 President/Financial Secretary Randy Sluder.

The rally was the first in a series of actions planned by the Council in the coming weeks. Click here for more photos.