Late last Wednesday, the Senate voted down an amendment from Senator Amy Klobuchar (D-MN) and Senator Bernie Sanders (I-VT) geared towards allowing pharmacies to import identical drugs from Canada, where prices are often much cheaper. In a boon to Big Pharma and their lobbyists, 13 Democrats and 39 Republicans voted against the amendment and it failed 52-46. The amendment was bipartisan as 11 Republicans voted for the amendment, meaning that the amendment had a real chance of passing. 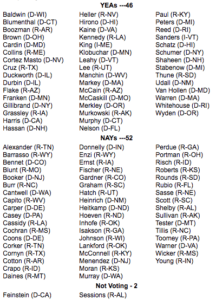 “13 Democrats and 39 Republicans in the Senate failed the American people on this amendment, and the counter-argument that Canadian drugs don’t meet safety standards is nonsense,” said TCU President Bob Scardelletti. “If the recent election taught us anything it’s that the American people want results – and protecting Big Pharma isn’t what they had in mind.”

The Klobuchar-Sanders amendment was largely symbolic, as it was an amendment to a budget resolution, which never actually becomes law and merely provides instructions to Budget Committee chairs on how to proceed. Nevertheless, the amendment would have sent a strong signal to current and future legislative efforts seeking change.

Drug costs (and healthcare costs overall) are higher in America than anywhere else in the world [click here for proof]. And for TCU representatives, healthcare is always one of the biggest sticking points at the bargaining table. TCU members currently enjoy quality, affordable health coverage because of the hard work of our bargaining teams, but that doesn’t mean that future negotiations tomorrow, or next year, won’t change that dynamic.

Our leaders need to focus on ways to bring down costs in the healthcare industry overall, and leveraging competition over drug prices is one of the ways we can do just that.