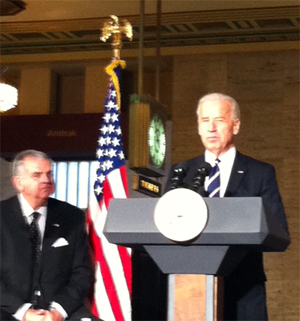 Vice President Joe Biden announced a new plan that will help the nation reach President Obama’s goal of giving 80 percent of Americans access to high-speed rail within 25 years. The proposal will place high-speed rail on equal footing with other surface transportation programs by providing $53 billion in funding over six years to continue construction of a national high-speed and intercity passenger rail network. Vice President Biden hit on three areas where the United States must continue to invest in order to remain competitive with the rest of the world “education, innovation and infrastructure”.

The Vice President made the announcement with Transportation Secretary Ray LaHood at Philadelphia’s historic 30th Street Station (pictured above) and attended by TCU National Legislative Director Ron Kloos. The Vice President pointed out the critical need that Amtrak fulfills across this country every day, especially in the Northeast Corridor of the U.S. He highlighted the Keystone corridor, “Since track improvements raised speeds between Harrisburg and Philadelphia to 110 mph in 2006, the Keystone Corridor has seen rail ridership rise by 57 percent.  In fact, more passengers now travel from Harrisburg to Philadelphia – and from Philadelphia to New York City and Washington D.C. – by rail than by plane.”

“As a long time Amtrak rider and advocate, I understand the need to invest in a modern rail system that will help connect communities, reduce congestion and create quality, skilled manufacturing jobs that cannot be outsourced. This plan will help us to do that, while also increasing access to convenient high speed rail for more Americans,” Biden continued

In order to complete the national system, the Obama Administration’s proposed investments will focus on:

TCU President Bob Scardelletti hailed Vice President Biden’s announcement as a commitment to the expansion of Amtrak, high speed rail, and American jobs. “While many in Congress would use the federal deficit as cover to slash Amtrak funding and kill high speed rail in its infancy,” said Scardelletti, “President Obama and our longtime friend and champion Joe Biden show the courage to build America’s future with this visionary proposal. We stand with them in this effort to strengthen Amtrak and to preserve and create good paying union jobs.”

“It will be an uphill battle now that anti-rail Republicans dominate the House and many statehouses,” added Scardelletti. “But we will do everything in our power to support the Obama Administration’s bold plans to expand high speed rail in America.”

The specific funding outlined by Vice President Biden will be listed in the upcoming federal budget expected to be released Monday Feb 14, 2011.

Click here to read the entire release from the White House.

Click here to read the Amtrak release about the “Gateway passenger tunnel.”