April 23, 2007—International President Bob Scardelletti announced today that TCU members at Metro-North Railroad have voted overwhelmingly to ratify a new agreement that is “positive and progressive” and “a testament to the unity of the membership and to the labor coalition that persevered through four long years of difficult bargaining.”

That coalition of unions, the Metro-North Labor Coalition, was led by spokesperson Joel Parker, a TCU international vice president.  “Throughout these years, our goal never changed: we were determined to reach a fair agreement containing the wage increases and improved benefits that our members deserve,” says Parker.  “Thanks to the membership’s solidarity and resolve, we reached an agreement that is far superior to every previous offer, including the recommendation of Presidential Emergency Board 240.”

The coalition represents some 3,500 employees at Metro-North, a commuter railroad serving parts of New York, New Jersey and Connecticut.  Of these, some 800 clerks and 300 supervisors are members of TCU and another 200 are Machinists.  In addition to the ratification votes of TCU units, coalition unions whose members also have ratified the contract are IAM District Lodge 19, IBEW System Council 7 and Local 1573, Firemen and Oilers (SEIU) System Council 2 and Transport Workers Locals 2001 and 2055.

Highlights of the agreement include:

March 30, 2007 — Eight unions in the Metro North-Labor Coalition reached a tentative agreement with Metro-North today pending membership ratification votes and approval by the MTA Board.  They are:

• No health and welfare employee contributions for current or new hire employees.

• Defined Benefit Plan with service credit back to 1983.

• Opt-out for all current employees to remain in defined contribution plan.

• 3% defined benefit contribution will not begin until October 1, 2005, resulting in 21 extra months of retroactive pay at 3%.

“We are very proud that thanks to the membership’s solidarity and determination, we have reached an agreement that is far superior to every previous offer, including the recommendation of Presidential Emergency Board 240,” says TCU International Vice President Joel Parker.

January 22, 2007 — At Metro-North, Presidential Emergency Board 240 on January 22 released its report to President Bush with non-binding recommendations to resolve the outstanding contract dispute between that carrier and the unions of the Metro-North Labor Coalition which include TCU Districts 227, 1043 and 1402 and Supervisors Lodge 5041. Coalition spokesman is TCU International Vice President Joel Parker.  The labor coalition will continue to pursue negotiations for a “fair and ratifiable contract,” he says.  “After nearly four years of bargaining, we are finally in the home stretch.  It is our fervent hope that Metro-North will now negotiate a fair final settlement.” 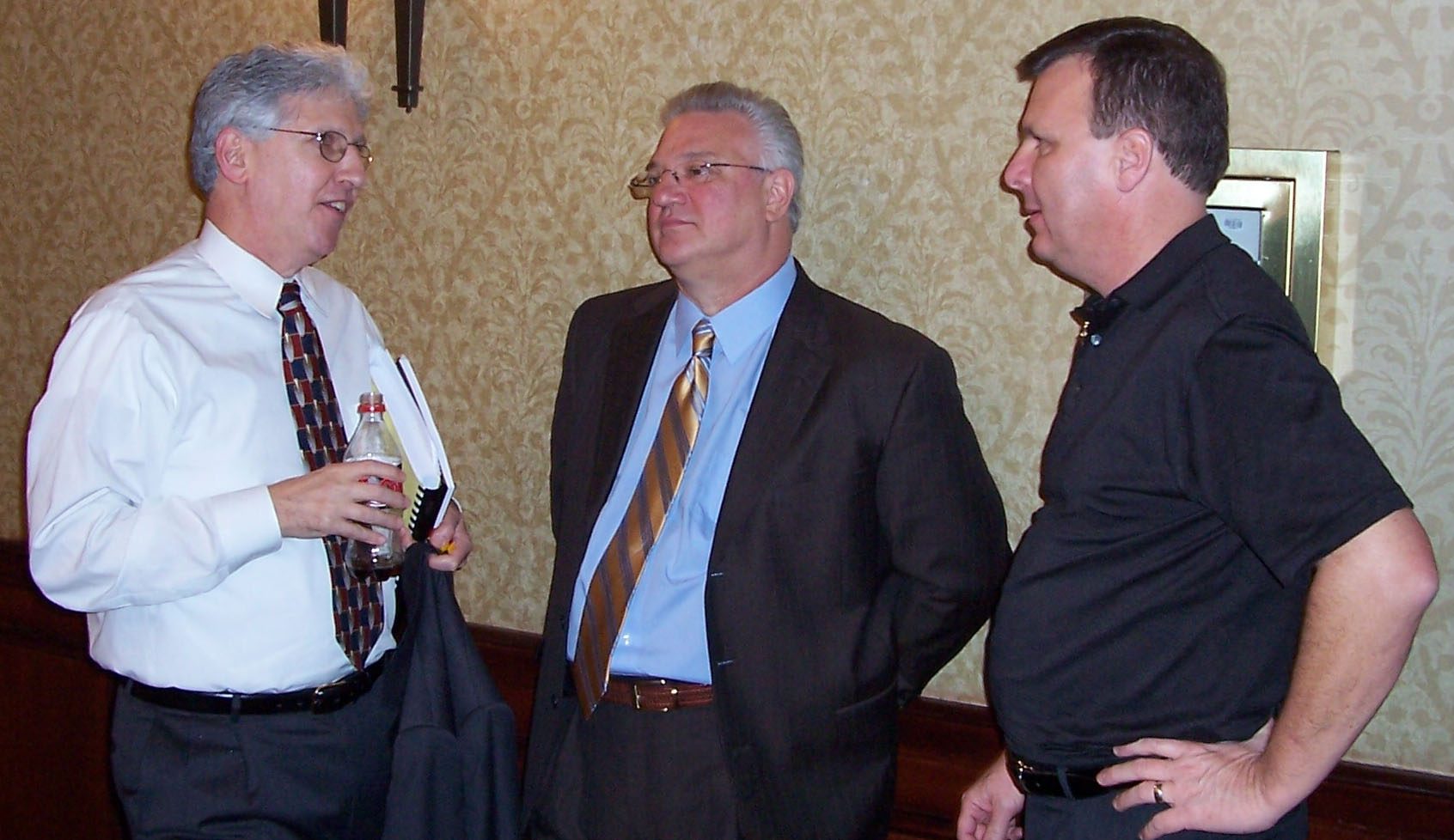 December 18-19, 2006 — Metro-North PEB 240 got started with hearings held December 18 and 19 in New York City.  Briefs had been submitted by both labor and management in advance and both sides presented their positions to the Board at the opening of the hearing.

Those making the case for the Metro-North Labor Coalition were legal counsel Roland Wilder; Joel Parker, TCU IVP and chief spokesman for the coalition; IAM representative Norm Brown, who also is the non-voting labor member on the Metropolitan Transit Authority Board; and Tom Roth, a rail and airline economics expert.

Post-hearing briefs will be submitted by January 5, with the decision due January 19, 2007.

Presidential Emergency Board Named at Metro-North

December 7, 2006 — At the request of the carrier, President Bush established Presidential Emergency Board 240 in the contract dispute between Metro-North, a commuter railroad serving parts of New York, New Jersey and Connecticut, and the labor coalition representing 3,500 employees there.  Some 800 clerks and 300 supervisors are members of TCU and another 200 are Machinists.

Appointed effective December 7, 2006, the Board has 30 days to hold hearings and issue non-binding recommendations for settlement.

On December 11 the White House named the three members of the PEB:  Patricia Hanahan Engman, Robert E. Peterson and Peter W. Tredick who has been designated Chair.  Engman, 65, of Florida, is an attorney who has held various government and lobbying positions, serving for some years consecutively as assistant executive director, deputy executive director and finally executive director of the Business Roundtable in Washington, DC.  Peterson, 77, is a former advisor to the New York Metropolitan Transportation Authority (of which Metro-North is part), former chief personnel officer of the Long Island Rail Road, and former manager of manpower planning and development for the now-defunct Penn Central. Tredick, of California, is an attorney who has served on two other PEBs, numbers 238 and 239, and had previously chaired the Foreign Service impasse dispute panel.  It is noteworthy that of the three only Peterson has served as a rail arbitrator, customarily a criterion for selection to serve on a PEB.

Creation of the PEB also started the clock on a period of 120 days during which, unless agreement is reached, the status quo must be maintained—management cannot impose unilateral changes or lock out workers and union members cannot strike.  (However, if no settlement is reached within the 120 days, any party to the dispute or the Governors of the affected states may request a second Emergency Board, and a series of actions could extend the status quo for another 90 days.)

In addition to TCU and the IAM, the Metro-North Labor Coalition unites members of the International Brotherhood of Electrical Workers, the Teamsters, National Conference of Firemen & Oilers of SEIU, the Sheet Metal Workers International Association and the Transport Workers Union.  To learn more about the bargaining impasse, click here.

Impasse Reached in Bargaining at Metro-North

November 7, 2006 —  It’s been almost five years since TCU members and others at Metro-North have had a wage increase or a new labor agreement.  Working together as the Metro-North Labor Coalition, the unions tried hard to negotiate terms that would be satisfactory to members, but bargaining reached an impasse.  Key issues include pensions, health insurance and wages.

Following a proffer of arbitration rejected by every union in the coalition, on Tuesday, November 7, the National Mediation Board finally acted on labor’s request to be released from mediation.  This starts the countdown toward several other steps required by the Railway Labor Act.  Theoretically, this could mean that workers would be closing in on a strike date of December 7.  However, in reality, it is likely that either Metro-North or one of the governors of the states in which the railroad runs will request establishment of a Presidential Emergency Board, setting in motion a series of steps which could take any possibility of action—if needed—into late next summer.  (Click here to see the coalition’s November report explaining the possible timeline.)

TCU International Vice President Joel Parker serves as spokesman for the coalition. “Through all these long years, our goal has never changed and that is to get the kind of contract our members deserve,” he says.  “The solidarity and unity of this Coalition is unprecedented.  That’s why we’ve been successful in being released and I am certain that we will continue to stand together in the days and months ahead.”

Members at Metro-North have the full backing of TCU, International President Bob Scardelletti says: “This fight for a contract has been a priority of ours for the past four years.  We strongly welcome this release from the NMB—it has long been time to move towards a conclusion.  And I promise these members that TCU will do whatever it takes to reach a strong settlement at Metro-North.”